Today I’m working on a new knitted hat pattern that’s been on the deigning desk for a few weeks.  It’s a cabled knitted pattern, something that I’ve never designed before and it is turning out to be a really challenging but fun process!
The Idea Origins:
Since reading Kate Davies wonderful book “Yokes,” I have been, well obsessed, to put it mildly, about the history of knitting in my province.  That got me thinking about my history, specifically my Irish heritage and it’s effect on me and my knitting.
My grandfather’s parents on my mother’s side came over from Ireland to Canada due to the Potatoes famine.  They met in Canada, purchased a farm, purchased a grocery store that sold all sorts of sundries, including yarn.  My granddad, Papa Charlie, managed it up until a few months before he died.   Here is a portrait of him getting ready for Canada Day, painted by my beautiful sister. 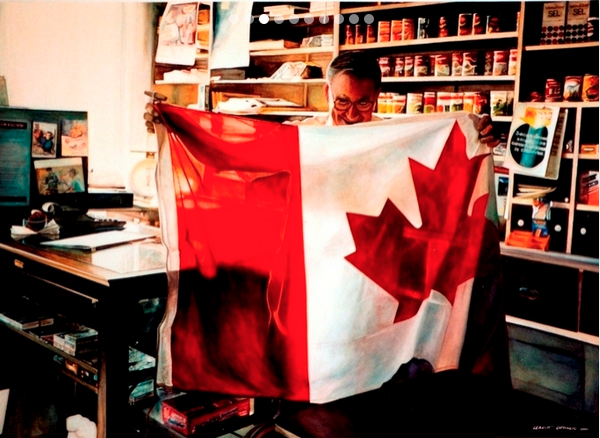 In this store, my mum learned to knit as a little girl by her father’s side during the lull between customers.  She learned the very basics, but it wasn’t until she was pregnant for her first child that mum learned how to knit garments.  Baby sweater sets are still one of her favourite projects to knit. 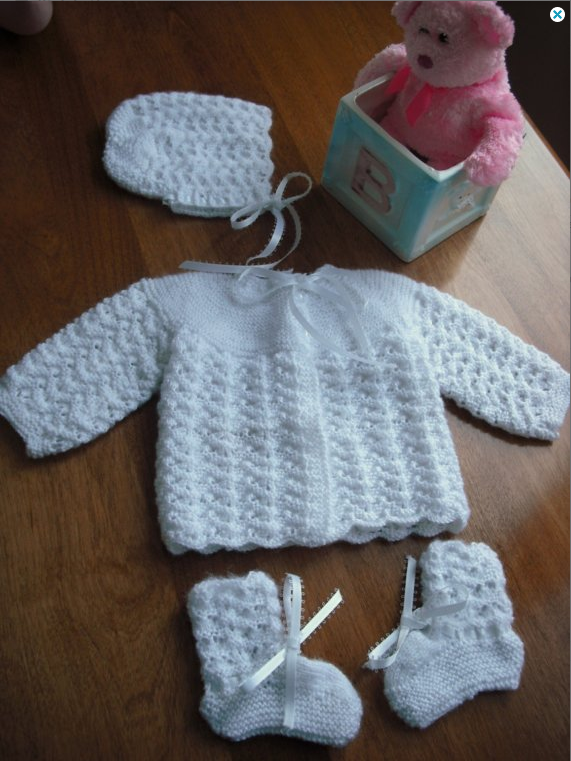 But with 12 grandchildren, all under the age of 12 yrs old, mittens are becoming a necessity to knit!  Mum loves to use all the scrape yarns from our finished objects to make these mittens.  I love these scrappy mittens; each one holds a story with each colour band.  As  precious they are to me, they really don’t last long.   Our rotten “kittens” keep losing their mittens! 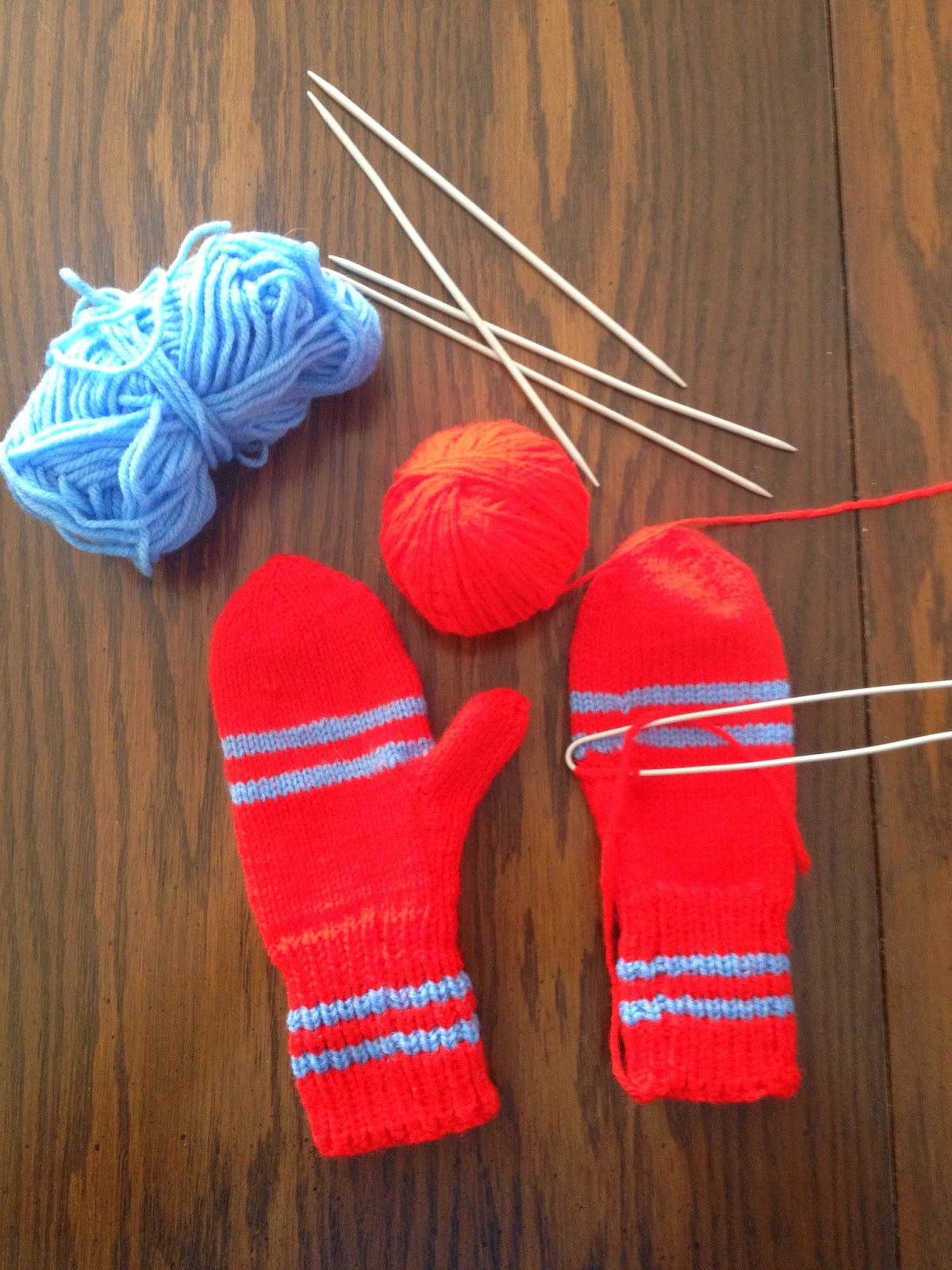 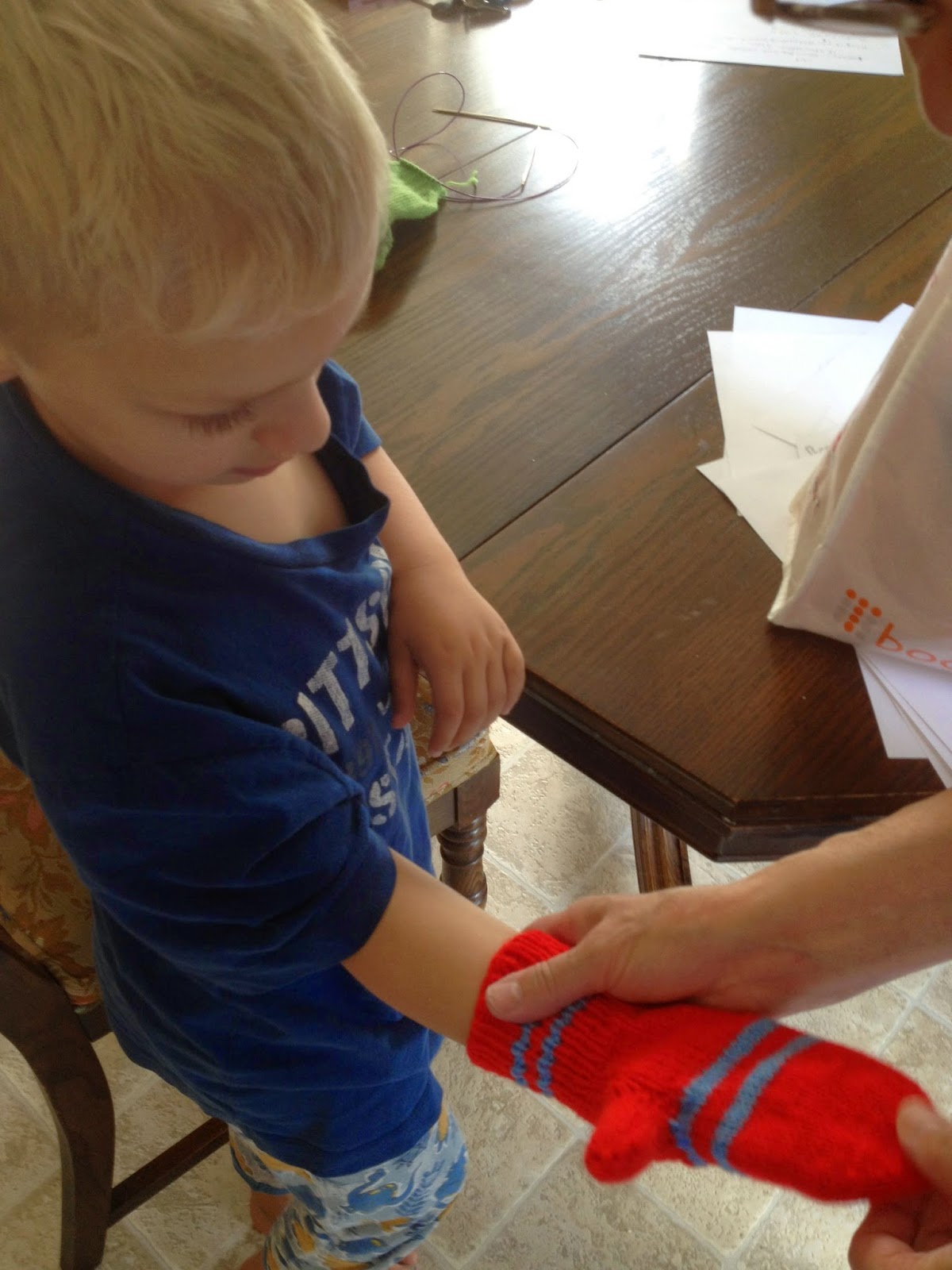 Mum testing the fit.  I love the look of Mum’s hands.
So, I began pondering my Irish knitting herritage.  Maybe you, like me, think of cable knits when you think of Irish knitting.  Or Irish lace.  Those are 2 types of knitting styles I haven’t really explored as a designer.  Hmmm.
I started researching Irish folklore and legends.  I came across the story of Niamh.  Here is the introduction to my pattern where I write about Niamh:

In Irish mythology, Niamh was the daughter of the sea god and one of the queens of Tír na nÓg, the land of eternal youth. She was the lover of the poet-hero Oisín. He was a mortal from Ireland who came home with Niamh. When Oisín became homesick and returned to Ireland for a visit, he asked where he could find his family, only to find that they had been dead for hundreds of years. Whilst trying to help some Irish men, he fell from the magical horse he was riding and instantly became an old man when he touched the ground. Meanwhile, Niamh had given birth to his daughter, Plor na mBan. Niamh returned to Ireland to search for her love, but he had died.
I used cables because they remind me of ropes and the sea. The 2 cable panels of the hat symbolize Niamh’s Love. The large intricate panel describes how love starts, blossoms, and can create something new. As time passes, it changes and becomes more about the new cable until outer cable eventually passes away, leaving the new cable as its legacy. The narrow undulating cable panel symbolizes time itself. It continues on no matter what happens.

I still have to work on the wording, but you get the idea.  The sea is a huge part of my herritage on both my mum’s and my dad’s side of the family.  Dad, as a wee little boy, was taught much about knitting while forced to hold the skeins for Grammy or her knitting friends as they wound up colourful wool balls that were not for play.  He also learned about the rudiments of crochet and tatting from his Grandfather, who was constantly repairing his fishing nets or making lobster traps.  (Many of my relatives still live on the coast and it is a wonderful treat to do family trips to the sea to visit them!)
Knitting and the repairing of nets were not activities my fore mothers and fathers did simply for pleasure.  These were the necessities of life.  My relatives, like most of the people living in the small fishing communities along the coast of New Brunswick, where poor.  Knitting was for warmth.  Nets were for eating.  Nets and woolen garments would be mended out of need.  And time, always moving, much like the sea, made a pattern of these jobs on the lives of these Maritime men and women.
With ropey cable patterns, the subject of time, the legend of Niamh and the strange pull of the sea has on me swirling about in my mind, I came up with the design for “Niamh’s Love.” 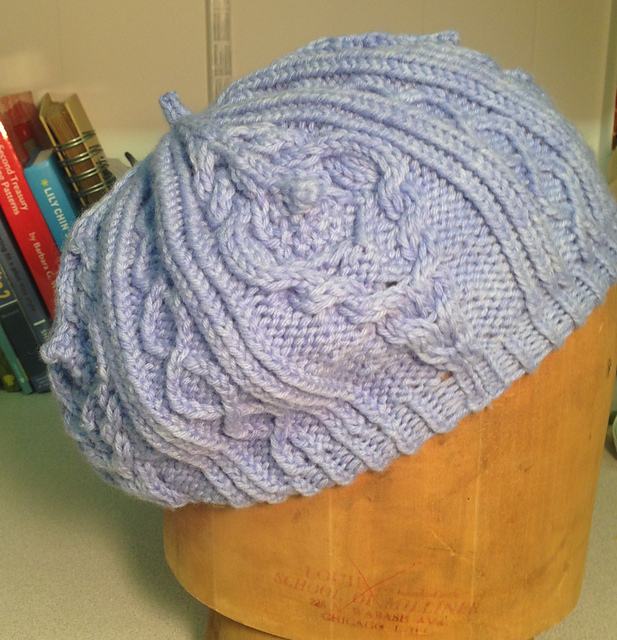 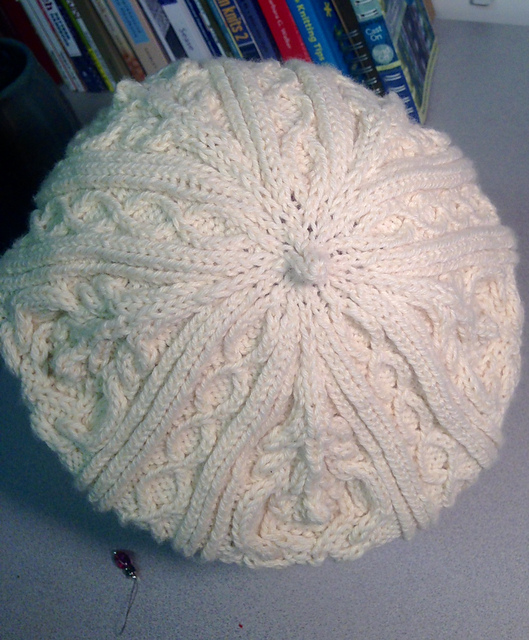 ©NiNDesigns
I love how the cables undulate and move throughout the hat.  I definitely see this pattern as part of a hat, cowl and mitten set.  The challenge now?  Getting converting the pattern from in the round to knitting flat for the cowl.

©NiNDesigns
The hat pattern is already out for test knitting.  I’ve yet to do the proper photo shoot, but I’m looking forward to it!

Don’t you just love making? I do! I sew, quilt, play with welding and I knit. I love to KNIT!
When I knit, I want to feel invested from cast on to cast off. To learn a technique from a different region in the world. To feel like I’ve just completed a knitting adventure. And when I try it on, magic! It is as unique as I am. All of these desires are what I strive to fulfill when I design a knitting pattern.